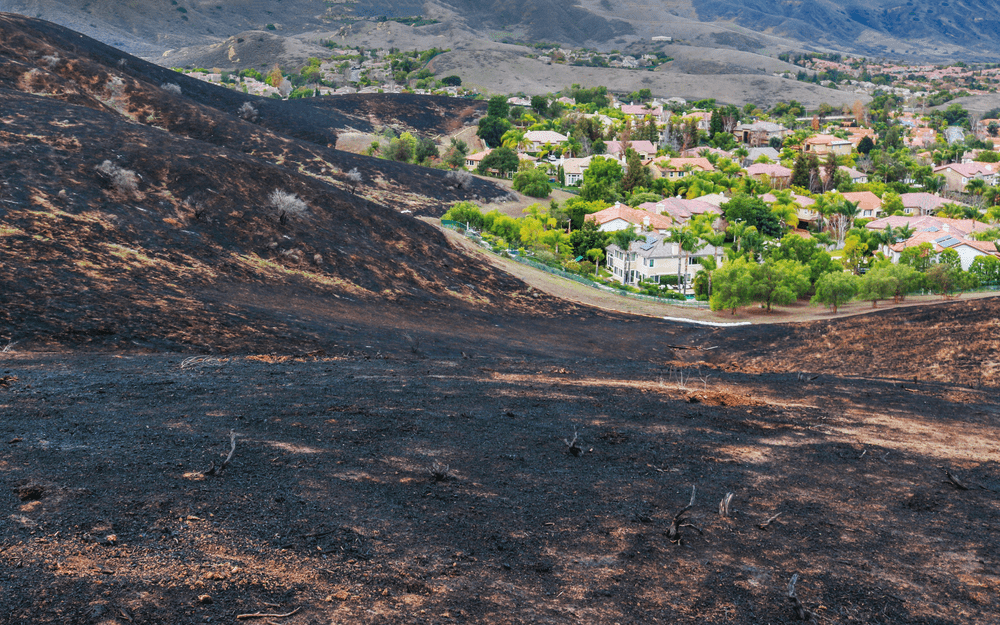 Looking at historical losses, 2017 and 2018 were outlier events. Correct? Well “Yes and No”! The loss data says “Yes” – the industry hasn’t seen such severe losses before. In contrast, our CatFocus® California Wildfire model says “No” – it shows that several similar wildfire events have occurred over the last half century.

Ergo, if your risk assessment is based only on industry loss data, you’re not getting the full picture. It’s time for a rethink.

We explain the losses vs model discrepancy and recommend a more robust approach to assessing and managing portfolios exposed to California wildfire.

The 2017 and 2018 industry losses were the most severe since 1950, but were in fact not that unexpected given the loss potential of other historical events.

The industry should be prepared for future losses of a similar magnitude to 2017 and 2018, and at return periods which will significantly impact property portfolios.

Exposure growth, especially in areas close to wildland, is the main driver of the changing risk landscape for California wildfire. It explains why regions with no prior loss are now also at risk.

Other factors impacting wildfire risk include human activities, weather, climate variability, climate change and biosphere-climate interactions, some of which are changing over time.

Reported and modeled losses give very different estimates of risk

California wildfire risk assessment based on reported industry losses (see figure 1a & 1c, PCS recorded industry losses from 1950 to 20182) indicates that the 2017 and 2018 losses were extreme, especially in Northern California. There are many years in the 1950 to 2018 time period when no losses exceeded the PCS’s reporting threshold3.

PartnerRe’s catastrophe model
In contrast, results from PartnerRe’s CatFocus® California Wildfire catastrophe model (see figure 1b & 1d) indicate that, using current industry exposure, many years in fact had the potential for losses greater than the PCS threshold. Previous historical events could have led to losses comparable to or exceeding the magnitude of loss observed in Northern and Southern California in 2017 and 2018 (figure 1a & 1c).

The difference is mainly due to changes in where people are living.”

Figure 1: Annual aggregate reported industry losses in USD billion for (a) Northern and (c) Southern California. Source: PCS2. Modeled annual aggregate losses for (b) Northern and (d) Southern California. Source: CatFocus®, PartnerRe. The difference between reported and modeled loss is significant – see also the disparate loss estimates for the Hanly (1964) and Clampitt & Wright (1970) wildfires – and strongly speaks to using robust catastrophe models to assess and evaluate current California wildfire risk. The PCS losses are only those that were reported and which caused an industry loss above the PCS loss threshold3. To ensure comparability with the reported losses, the same (current PCS) threshold is used for the modeled losses.

Why are these two estimates of risk so different?

The difference is mainly due to exposure growth: changes in where people are living (e.g. from 1990 to 2010, the number of buildings in the Wildland-Urban Interface4 increased from 3.3 to 4.4 million5), higher population density and increased property values. This exposure growth has a particularly strong positive and complex (non-linear) impact on risk evaluation.

Risk assessments informed by reported losses (which also often have the issue of incomplete loss record due to reporting biases) are challenged to adequately and reliably take exposure growth and other risk factor changes into account. In contrast, catastrophe models can do this well and therefore lead to a different estimation of the risk.

Modeled return periods of the 2017 and 2018 annual aggregate losses 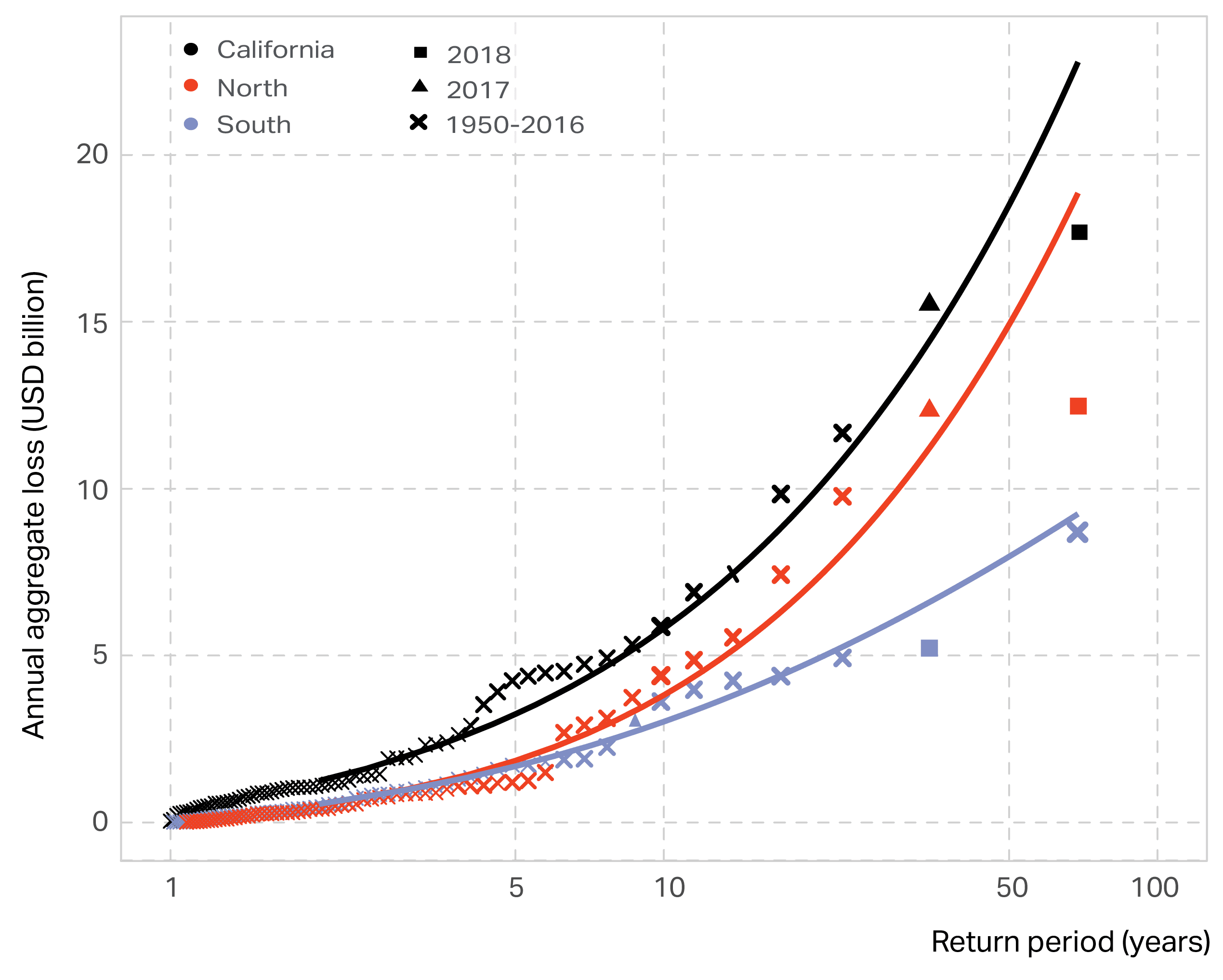 Figure 2: Modeled industry annual aggregate loss exceedance probability curves for California as a whole, Northern California and Southern California. The 2017 (triangles) and 2018 (squares) annual aggregate losses for each region are also shown. Return periods of the modeled losses (crosses) are calculated using the empirical method, where the highest modeled loss has a return period of 69 years, equal to the length of the modeled time series shown in figure 1b & 1d. The smoothed colored lines are generalized extreme value distributions fitted to each regions’ modeled losses. Source: CatFocus®, PartnerRe.

For California as a whole, CatFocus® indicates that:

For Northern California, CatFocus® indicates that 2017 and 2018 annual aggregate losses:

In addition, our own analysis points to a strong underlying positive trend in the hazard in this area over the last decade, which may be partly driven by other factors including climate change6,7,8. Modelled results require an adjustment to reflect this, and this adjustment further reduces the estimated return periods of the 2017 and 2018 losses.

For Southern California, CatFocus® indicates that:

The model allows us to differentiate the risk between different insurance portfolios – to reflect their specific exposure concentrations – and to ascertain portfolio-specific return period ranges for the 2017 and 2018 events (see table 1). Importantly, since there are a large number of potential loss events based on historical footprints, the model is able to identify at-risk regions that have not recently been loss affected.

Table 1: Modeled return period estimates (in years) for the annual aggregate losses from the 2017 and 2018 events split by region, for the industry exposure and for three sample insurance portfolios. Source: CatFocus®, PartnerRe.

If you found this overview interesting, and/or have related findings or opinions to share, please contact us. We look forward to hearing from you.

Model specifics
The hazard component is based on historical fire perimeters compiled by the Fire and Resource Assessment Program (FRAP)9 from 1950-2018 for area burned exceeding 300 acres and conditioned with USDA wildfire hazard potential data10. See example footprint in figure 3. To estimate the ground-up loss, the model combines the hazard with high-resolution exposure information and an estimate of the damage ratio. The CatFocus® financial model then applies the re/insurance financial conditions to calculate the net loss.

Figure 3: Example of a wildfire hazard footprint. Transect taken from the Thomas 2017 event in Southern California. The blue line is the FRAP9 fire perimeter and the colors indicate the wildfire hazard potential10 (red shaded areas have the highest potential). The property exposure can be seen in the background satellite imagery. Source: CatFocus®, PartnerRe11.

The model is able to reproduce the 2017 and 2018 industry losses (see figure 1b and 1d) and has been validated on insurer specific losses, a further indication that it is a reliable tool for risk assessment.

Limitations and developments
The model considers the direct impact of fire within the fire perimeter and does not attempt to explicitly incorporate losses from indirect causes of damage, e.g. by smoke outside of the historical fire perimeters.

The model is limited to historical scenarios and does not yet include a “stochastic event set”, which would allow the model to be used for less homogeneous exposures. [Comment added September 15, 2020: “However, this is being added and will soon be available”].

There is uncertainty associated with using historical fire footprints overlaid on today’s exposure, summarized by the following question: Would the fire perimeter look the same given that there is now exposure within the footprint? We would expect that in some cases the historical fire would now be fought with different capabilities, which could affect the loss potential of an individual event. However, as observed in 2017 and 2018, isolated conflagrations ignited by flying embers are extremely difficult to fire fight and have resulted in significant losses. Overall, this suggests that historical scenarios are suitable and reliable for assessing today’s risk.

Additional analysis (not shown) of the 1950-2018 Californian wildfire activity (based on FRAP data) indicates a clear upward trend in burned surface area per year, primarily involving forest areas in Northern California. The trend is not as strong in Southern California, where wildfire more often occurs in shrubland. This implies that the model’s “stationarity assumption” may require adjustment, and that the return period for 2017 and 2018 in Northern California is likely to be shorter than the model suggests. This, and other non-stationarity factors such as climate change6, climate variability7, forest health8, and human interactions12, will be investigated in subsequent research projects.

1 Northern and Southern California are separated by a line at 35 degrees north latitude.
2 PCS (Property Claims Service), a division of Verisk. Not for distribution without the permission of PCS. For more information, please contact Tom Johansmeyer, tjohansmeyer@verisk.com. Extraction date: April 29 2019.
3 The PCS loss reporting threshold is USD 25 million. Prior to 1997, lower reporting thresholds of USD 1 million (1949 – 1982) and USD 5 million (1983 – 1996) were used.
4 Wildland–Urban Interface (WUI): transition zone between wildland (unoccupied land) and populated areas. WUI areas are at risk of catastrophic wildfire as more than 75% of buildings destroyed in California wildfires are in WUI areas. Kramer et al., 2018. “Where wildfires destroy buildings in the US relative to the wildland–urban interface and national fire outreach programs”, International Journal of Wildland Fire 27, 329-341.
5 Radeloff et al., 2018. “Rapid growth of the US wildland–urban interface increases wildfire risk”, Proceedings of the National Academy of Sciences of the United States of America 115, 3314–3319. doi:10.1073/PNAS.1718850115.
6 Intergovernmental Panel on Climate Change (IPCC) drought index projections and regional climate change models show increases in wildfire risk during the summer and fall on the southeast Pacific coast, northern plains and in the Rocky Mountains. Intergovernmental Panel on Climate Change, 2014: Climate Change 2014 – Impacts, Adaptation and Vulnerability: Part B: Regional Aspects: Working Group II Contribution to the IPCC Fifth Assessment Report. Cambridge: Cambridge University Press. doi:10.1017/CBO9781107415386.
7 Climate variability is leading to significant inter-annual and inter-decadal fluctuation of wildfire hazard risk. Drought years have a higher likelihood of severe wildfires and wind conditions significantly alter the risk, especially of large fires.
8 Since 2010, an estimated 129 million trees have died in California’s national forests due to climate change, unprecedented drought, bark beetle infestation and high tree densities. e.g. https://www.fs.fed.us/psw/topics/tree_mortality/california/index.shtml
9 Historical fire perimeters are compiled and maintained by the State of California Fire and Resource Assessment Program (FRAP). The FRAP fire perimeter database, updated to 2018, was downloaded from http://frap.fire.ca.gov/data/frapgisdata-sw-fireperimeters_download (accessed February 21, 2019). Due to data inhomogeneities, the analysis focused on the period of 1950-2018 and fires with an area burned exceeding 300 acres.
10 The wildfire hazard potential (WHP) map is produced by the USDA Forest Service and depicts the relative potential for wildfire. Areas with higher WHP values represent a higher probability of extreme fire behavior under conducive weather conditions. https://www.firelab.org/project/wildfire-hazard-potential.
11 Background satellite imagery tiles © Esri — Source: Esri, i-cubed, USDA, USGS, AEX, GeoEye, Getmapping, Aerogrid, IGN, IGP, UPR-EGP, and the GIS User Community.
12 Population growth into wildfire-prone regions increases the exposure and impacts the hazard itself e.g. more infrastructure (downed power lines), more frequent campfires and arson. On the other hand, wildfire risk can be mitigated by human activities such as through active forest management (e.g. planned fires to reduce fuel accumulation) and improvements in firefighting practice.