Mortality Rate Improvements – End of an Era, For Now… 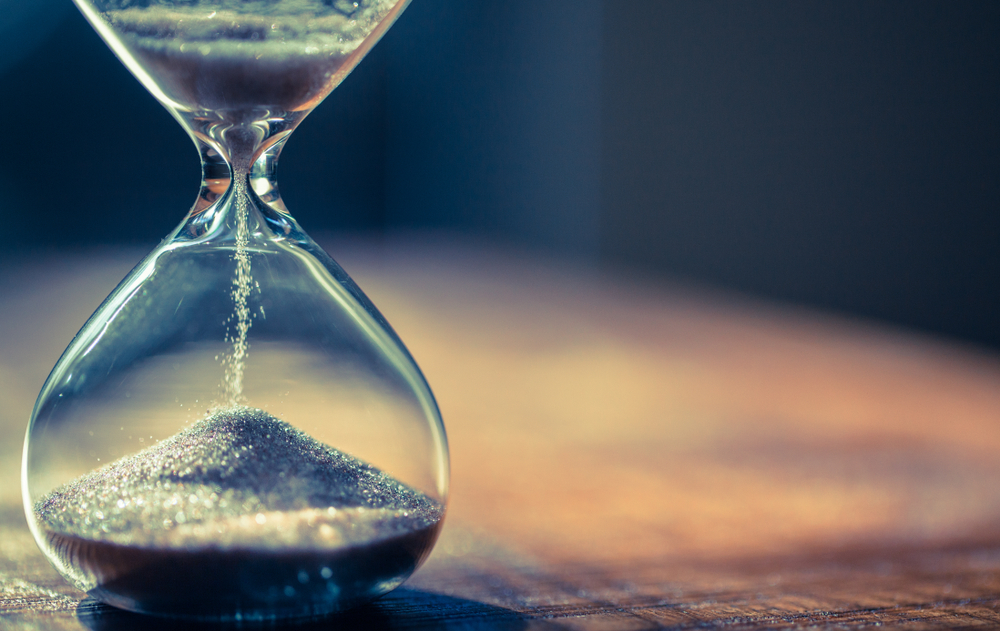 Improvements in mortality rates characterized the twentieth century – the trend of living ever longer and healthier lives seemed assured.

Recent mortality rates, however, point to a change. The positive trend has slowed. But why? Are all ages affected? And surely medical advances will anyway have us back on track asap?

To answer those questions, we look at high-level developments in the main causes of mortality and their relevant risk factors. The recommendation is for caution: The future will remain less rosy, for now at least…

A slowing improvement in mortality rates

Figure 1 shows the overall trends in mortality rates and life expectancy at birth for the US population. US data is predominantly used throughout this paper as detailed mortality data is available for the US. 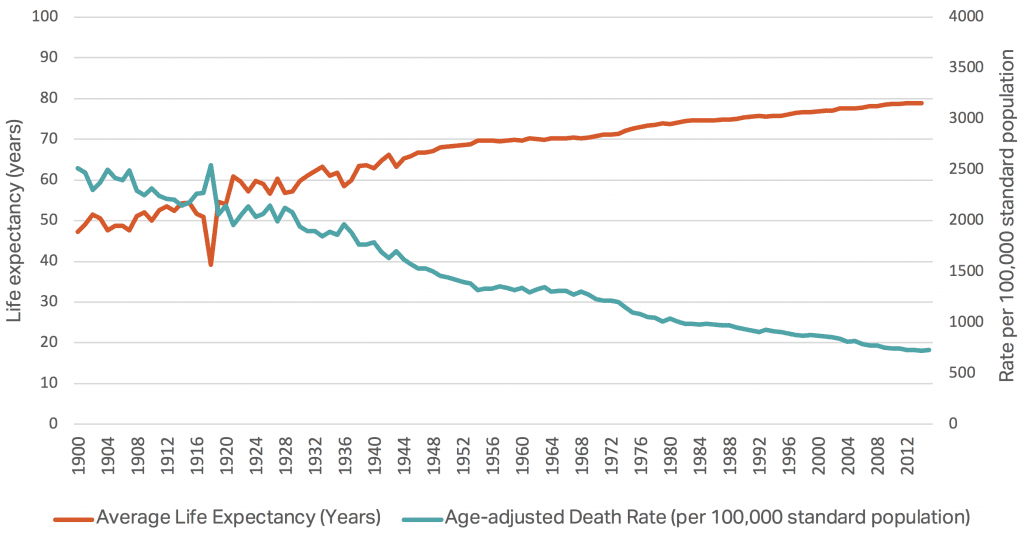 Figure 1: Age-adjusted mortality rates (blue line) and life expectancy at birth (orange line), both sexes, all races, US population, 1900-2015. Mortality rates show steady improvement (reduction) over the period, but in fact began to level off in 2010. Life expectancy at birth has likewise increased, but shows a similar levelling off in recent years. Looking far back, the impact of the 1918 flu pandemic is clearly visible, as is the bounce back in rates and life expectancy after this event. Source: CDC3.

We now break down this data by cause-of-death (leading causes, US); coronary heart disease, stroke and cancer, see figure 2. For each cause, we consider which, if any, age groups are most impacted by slowing mortality rate improvements, and how the evolving medical expectations and relevant risk factors for each cause might impact the future trends for these diseases. 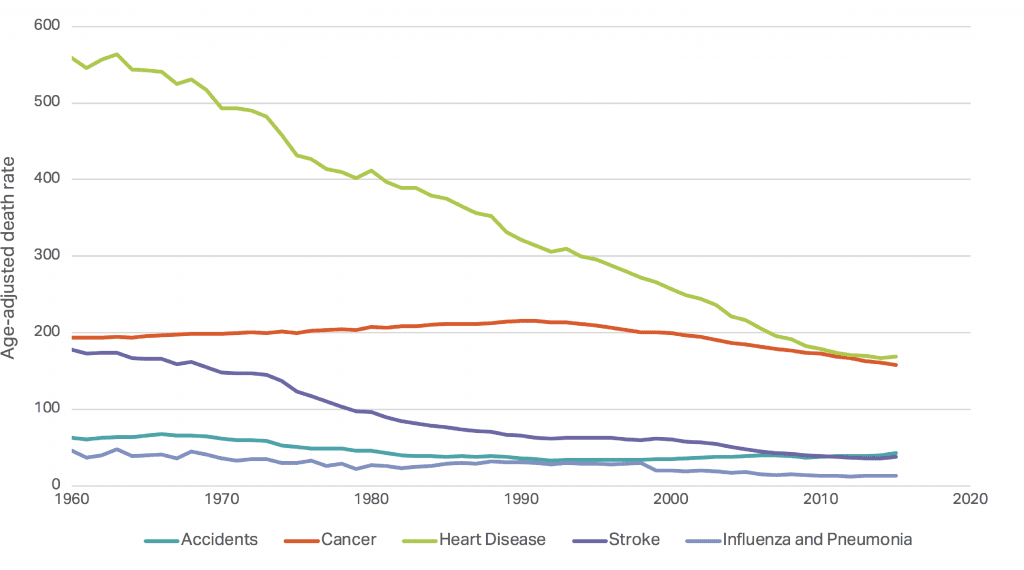 Figure 2: Age-adjusted mortality rates by major cause of death, US population, both sexes, all races, 1960-2015. Most notably, heart disease rates (green line) fell significantly since the 1960s, being the major contributor to overall population mortality improvements during that time period, but flattened out in the last five years. Cancer rates (red line) continue to steadily fall. ‘Accidents’ refers to ‘unintentional injuries’, i.e. excludes suicide. After these main causes of death, Alzeimer’s disease and diabetes were the next two leading causes in the US in 2015-164. Source: CDC3.

The trends for the main natural causes of death

Coronary heart disease and stroke (28% of deaths5): Five decades of mortality rate improvement from these diseases in the US across all age groups was a major contributor to falling overall population mortality rates. In the UK, for example, 70% of all improvements from 1968-2010 were due to the decline in deaths from circulatory diseases2.

“Over the last few years, mortality rate improvements from coronary heart disease and stroke have reduced.”

The earlier improvements can be attributed to lifestyle changes (especially reduced smoking) and medical advances, including bypass surgery and pacemakers in the 1970s, followed by coronary stents and stroke units in the 1990s.

Rate improvements are now reducing and further significant rate improvements from medical treatment are not anticipated for this disease group: most therapeutic innovations are already widely implemented, clinical trials for heart drugs significantly lag behind those for cancer6, and although new drugs offer hope within the next two decades, these are primarily for smaller subgroups of heart patients.

Overall, and before any meaningful implementation of next generation medicine, the period of strong mortality rate improvements for coronary heart disease and stroke would appear to be behind us.

Steady US mortality rate improvement for cancer since 1999

As for coronary heart disease and stroke, improved lifestyle has been a contributor to the positive trend. From a medical perspective, improvements from radiation therapy and chemotherapy in the last century are expected to be succeeded by future applications in cancer genomics, personalized medicine such as immunotherapy and earlier detection from liquid biopsy over the next 10-15 years. The high number of compounds in clinical development for cancer adds to the positive future outlook6.

External (c.f. natural) causes of death increasing in significance in the US

Now the third highest cause of US mortality (6% of deaths5).

Mortality rates from external causes (e.g. from traffic accidents, homicide and self-harm, including suicide and poisonings (mainly drug/opioid addiction)) have been slowly increasing in the US since 1999 (1.8% over the period 1999-2016, with variations by cause and age group).

Opioids are a significant contributor to the upward trend in the US, impacting all ages (above 15 years) and social classes, but with higher mortality rates observed for lower socio-economic groups8. Canada9 and the UK10 are also affected, but to a lesser extent.

Figure 3: Age-adjusted opioid mortality rates, 1999-2016, US population, all races. The upward trend followed by a sharp increase in 2015 is apparent. Source: SOA5.

Despite potential future improvements for some external causes of death from developments such as driverless cars and stricter weapons controls, the overall outlook for the US remains negative. If the statistics for these causes of death continue to worsen, the impact on future mortality rates will be meaningful.

Future rates, however, are threatened by increasing antimicrobial resistance (AMR), which is rising at an accelerating rate, and by the fact that there is a lack of investment in new antibiotics12; only 1.6% of drugs in clinical development by the world’s 15 largest pharmaceutical companies were antibiotics13.

Next generation medicine represents a sea change in our capabilities to improve mortality rates. But when will this happen? Digital health, for example, is already upon us and developing fast (e.g. artificial intelligence, eHealth, wearables, electronic health records, telemedicine and health apps). Genomics, the key to a new level of disease understanding, innovations in disease prevention, new drug targets14 and better drug efficiency, is also developing fast but still has many challenges to overcome, most likely requiring at least another two decades. The two combined (e.g. for simulations of an individual’s likelihood of disease and targeted, preventative surveillance) offer even greater future potential through precision, individualized medicine.

While overall mortality rates in the US are falling across all socio-economic groups and ages, global studies observe variations linked to socio-economic factors such as wealth, marital status, level of education and race15,16,17. For example, as previously noted for opioids, higher social class can be a general proxy for lower mortality. How socio-economic inequalities in mortality are changing is complex and varies, for example, by age18: inequalities have decreased for younger ages (0-20), notably increased for those aged over 50, remained steady for women aged 20-50, and decreased for men aged 20-50 (closing the gap between men and women in this age group).

And the overall prognosis?

Mortality rate improvements, largely driven by wins from healthier lifestyles (smoking reduction) and advances in diagnostics and the treatment of common diseases, have slowed in the last decade.

For heart disease, US ages 65-74 experienced the worst slowing. Cancer rates are still showing some promise, but the cohort effect (see below, ‘Background insights’) that helped to boost the past in some regions is fading, external causes of death (accidents and suicide) are increasing in significance in some regions (in the US, especially since 2015 and in ages 25-44; for opioids, ages 15-74), and AMR is on the rise. Next generation medical progress, digital health and genomics in particular, may begin to claw back some of that downward trend in coming years, but any meaningful impact from these areas will need more time.

We find ourselves in a dynamic, interim phase of mortality rate improvement. Caution is needed. Slowing will remain in place in some regions, at least for a while. Thereafter, the new mortality landscape will be drawn out by the interaction and timing of next generation medical advances and by the specific progression of AMR, lifestyle and socio-economic risk factors.

“We find ourselves in a dynamic, interim phase of mortality rate improvement. Caution is needed.”


Your partner for Life risks

Our experts – a closely collaborative team of Life actuaries, underwriters, market specialists and medical experts – continually analyze the trends in and determinants of mortality data to ensure best practice for supporting our clients’ Life term and annuity portfolios.

We are a forward-looking discussion partner for our clients for all Life risks. Please contact us to find out more about our Life risk solutions or to discuss how the trends summarized in this paper could impact your portfolio.

The effect has been documented in the UK, US20 and Canada21, but is most pronounced in the UK. There is no clear documentation of it in other countries. The specified cohort experienced the depression, war, smoked, quit smoking in their masses, and later benefitted from major medical advances in the 1960s and 70s. It experienced materially improved mortality compared to the preceding cohort and subsequent cohorts have not improved as much.